Water Sports at Calangute Beach Goa is the Favorite Relaxing Tour for the Tourists. Calangute Beach is the most popular Goa beach with thousands of Tourist visits the peak and off-season.Calangute Kohlongutt, pronounced  is a census town with a permanent population of approximately 16,000  in North Goa, in the state of Goa, India. 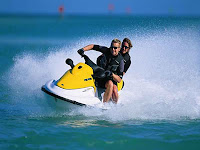 Calangute is famous for its beach, the largest in north Goa, visited by thousands of domestic and international tourists alike. The peak tourist season is during Christmas and New Year, and during the summer in May. During the monsoon season, from June through September, the sea can be rough and swimming is prohibited.The beach is fringed with popular restaurants and hotels, including the Calangute Residency operated by GTDC.

The village was originally named Kolongutt, though with the invasion of the Portuguese, the word probably got distorted to Calangute, and has stuck until today. The name Cal is probably connected with the Hindu Goddess Kali, worshipped by the fisher folk. There was a temple in the area of Motth. Another possibility is that it comes from Kalyan-Gutti, which means a village of art, a beautiful village. this is quite a plausible derivation. A third possibility is from konvallo-ghott, meaning a coconut with a strong pith, since coconut trees are believed to possess strong pith as the "marrow" or soft substance in the center of the plant.