Palolem Beach Goa Nightlife is at the Beach Huts, Hotels ,
Beach Shacks with the Music and Dance on the Sands. Palolem is quite small, so easy to explore on foot. Mopeds and bicycles are available for hire on the main street.

Palolem Beach Huts or Shacks are very Popular for the Good Sea Food. The Price for a Good Beach Hut ranges from Rs 500 to Rs 2000 per Nights depending upon the Peak Season and Availability 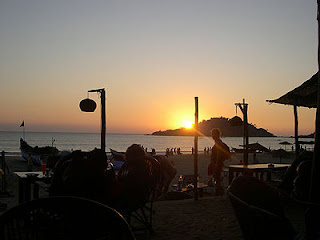 Palolem Beach is at 15°00′32″N 74°01′22″E, within 2 kilometres from the market town of Chaudi in the south Goan taluka of Canacona, which is about one hour's drive from the coastal town of Karwar in Karnataka and about 40 minutes from Margao (Main city in South Goa).Other neighbouring beaches in South Goa include: Agonda beach & Cola beach.

The beach is largely unspoiled and is inhabited by both local fishermen and by foreign tourists who live in shacks along the shore or in the main village itself. It is about one mile (approximately 1.61 km) long and is crescent-shaped - one can view the whole beach from either end. Both ends of the beach consist of rocks jutting out into the sea. The depth of the sea increases gradually, it being shallowest at the northern ends of
At the top of the island adjoining Palolem beach there is a stone sculpture created by an American Conceptual and Land art artist Jacek Tylicki called "Give if you can - Take if you have to" also called "the Money stone". It became a pilgrimage destination. At the low tide it is a tough jungle walk and a guide is recommended. People can leave or take money at will at the Money stone.